I have the 6 qt IP-60DUO Instant Pot Pressure Cooker – I cannot tell you how much I love this machine! It has made my life so much easier. When I got it, I never imagined I would make CHEESECAKE in it. I was of the mindset that some things are better left for the oven.

Baking in a pressure cooker? I don’t know… Well, now that I have made this Cinnamon Chip Cheesecake, my Pumpkin Pie Bread and Banana Cake Bread, even Perfect Semi-homemade Cornbread in my Instant Pot Pressure Cooker… I have changed my mind!

Please DO NOT BE INTIMIDATED by making cheesecake. I hear that so many people are. OK – I admit it, I was, too.

To be HONEST with you, making my Pumpkin Pie Bread or Banana Cake Bread is harder than this cheesecake (although I would consider none of them difficult, truly)!

Personal opinion here: I am not a huge fan of the over-the-top cheesecakes that have peanut butter cups or cookies or drizzles of whatever toppings. Cheesecake is divine (especially made easy in the Instant Pot Pressure Cooker!). It is rich and delicious, creamy and sweet. Do you really need chopped chocolate candies, cookies and all that other jazz? Personally, I think it totally takes away the simple, rich, pure deliciousness I LOVE about cheesecake. To Each His Own

This Cinnamon Chip Cheesecake is the perfect balance of adding flavor, but not taking away from the innate divinity that is Cheesecake! 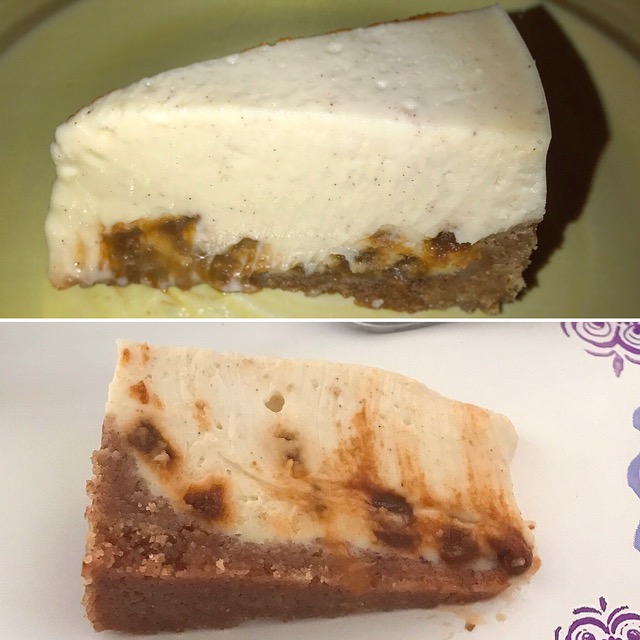 *some recipes call for heavy cream, but I use regular 1 or 2% milk (whatever I have in the fridge — turns out GREAT!

**cinnamon chips can sometimes be hard to find in stores, so I often buy online!

Pressure Cooker, I have the 6 qt IP-60DUO Instant Pot

*can also use a push pan, but I prefer springform

Food Processor**, I have a Black & Decker – has lasted me YEARS!

Process graham cracker crumbs to a fine crumb – I use my Kitchen Aid hand mixer with mini food processor attachment so I don’t get my large food processor dirty before needing to use it for the filling. You can also put the graham crackers in a zip top back and bang the mess out of them with a meat tenderizer or rolling pin! 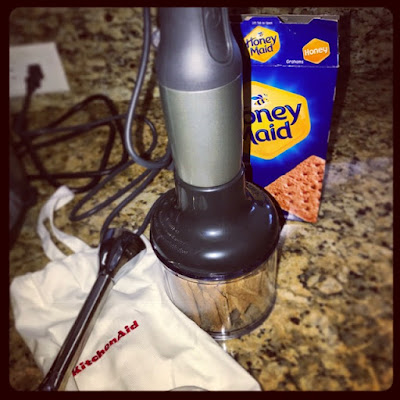 Pour crumbs into springform pan (or push pan if using) and evenly press it into the bottom of the pan and up the side about an inch. I use my good ole clean fingers!

Add both eggs, then mix very lightly until JUST combined. On my food processor, I pulse 5-6 times tops! Most important part of cheesecake is to NOT over-mix the eggs.

Create foil “sling” using 1 long piece of foil, about 1 1/2 feet long. Fold edges into the center lengthwise… the point is for you to use this to put the cheesecake in the pressure cooker and take it out.

Cover cheesecake with 1 large paper towel (you can see below, I only had the small pieces so criss crossed them – don’t do this if you don’t have to because the paper towel may sort of fall into your cheesecake and leave paper marks [mine did, but whatever… taste NOT affected!].

For Instant Pot, press Manual (should default to High Pressure), and use +/- buttons to adjust cook time to 38 minutes.

When cook time is complete, allow pressure to naturally release (NPR) fully, this took about 20 minutes for me.

How do you know when the pressure has released? For most pressure cookers, you should have an indicator pin that drops – if you look at the picture above that shows the Instant Pot Vent Knob being turned to sealing, to the right of that knob, take note of the silver “pin” – when up, the pot in pressurized; when down, the pressure has release.

Carefully remove cheesecake with foil sling, remove foil and paper towel, then allow to cool on counter for 1 hour.

Afterwards, cover with paper towel and plastic wrap or foil (I use the same foil I covered it with in pressure cooker, making sure to have dried it completely) and allow to cool completely in fridge, about 6-8 hours. I know, its so long to wait, but trust me it is worth it!

You’ll want to eat it so fast, I know… but take a slow, thoughtful bite. It is SO DELICIOUS – it deserves to be mindfully savored!

If you’re anything like me, you’ll end up with a sliver for breakfast with a cup of Ready-for-Adventure coffee, too!

Check out all of our Favorite Pressure Cooker Accessories!

I love Oatmeal.I have shared my love for oatmeal before, along with my Instant Pot Pressure Cooker recipes for Pumpkin Spice Oatmeal,Maple Brown Sugar Oatmeal and Apple Cinnamon Oatmeal.

I could eat oatmeal every morning and be the happiest morning person in the world… as long as there’s coffee – don’t forget the coffee.

There are so many benefits of oatmeal. “This whole-grain powerhouse has been packing serious nutrition and hearty flavor into breakfast for generations. It’s one of the few comfort foods that are as good for you as they are just plain good… [with a] proven ability to curb bad LDL Cholesterol” — I couldn’t agree more WebMD!

A healthy breakfast can help you eat better thought the day. “Oatmeal contains fiber which stays in the stomach longer and helps you feel fuller, longer” [healthyeating.org].

However, “some packets of instant oatmeal are…loaded with sugar… and high in sodium” [WebMD].

I have eaten plenty of packets of instant oatmeal in my younger days – but in these, well, older days I prefer to make it myself.

Oatmeal in the pressure cooker is not only delicious, but it is SO EASY! Anything that can make a sometimes hectic week day morning EASIER, I am all about. Thanks, Instant Pot!

This recipe can be adapted for any pressure cooker, although I use an Instant Pot (which I am OBSESSED with – LOVE it).

1 apple, peeled and cut into 1/2 inch cubes (any apple is fine, I used Fuji)
1-2 T butter or coconut oil
1 1/4 t. cinnamon
1 t. vanilla
1/4 t. salt
0-3 T. brown sugar (depends on your sweetness preference. I actually skip the sugar altogether and garnish with a swirl of pure maple syrup or honey when served)

Add all ingredients to pressure cooker and stir.

Stir and Serve!
I get 3 generous, or 4 moderate servings from this recipe – you can absolutely double or even triple/quadruple this recipe!

I prefer topping my Oatmeal with walnuts and a swirl of pure maple syrup – YUM!
Apple Cinnamon Oatmeal – thanks, Instant Pot!